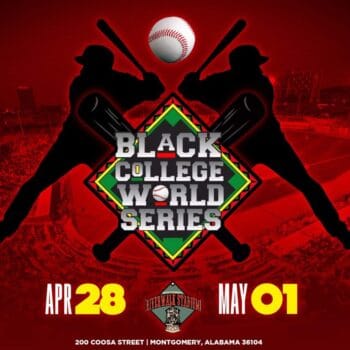 A new chapter in the legacy of Historically Black College and University (HBCU) baseball was written this past spring during the conclusion of the 2021 season when the announcement of a Black College World Series officially took place. The event served as the stage for an annual postseason invitational tournament to determine a national champion for HBCU “small school” baseball programs.

The inaugural series featured (eight) original HBCU baseball teams. The field was reduced to six amid two teams not competing due to COVID-19 protocol and administration restrictions. The final field was made up of two from the National Collegiate Athletic Association (NCAA) Division II and four from the National Association of Intercollegiate Athletics (NAIA). School baseball programs from these two athletic governing associations constitute the “small school” division.

Selection and seeding for the tournament was based upon Black College Nines’ weekly HBCU small school division national baseball poll. Pollsters came from a diverse group of informed and impartial individuals who follow college baseball on all levels, including HBCU baseball. Included in the group were college athletic administrators and educators, college baseball writers and other sports journalists and broadcasters, former HBCU and other college ballplayers and above all else… college baseball enthusiasts who have an interest in promoting HBCU baseball.

BCSN also carried live coverage of the release of the final rankings and selection show.

Arrangements for the Black College World Series were made in conjunction with guidelines provided by administrators of both the NCAA and NAIA, as well as with school officials and coaching staffs.

The University of Maryland Eastern Shore baseball team couldn’t have been more dialed in this fall, and that could be bad news for opposing teams this coming 2023 season. The… [...]

The Harris Stowe State University baseball team is looking for another strong and challenging schedule for this upcoming 2023 season. The American Midwest Conference (AMC) is considered one of the… [...]

Fall Ball Report: Paine Baseball is Back and the Lions Have Started Scrimmages

Each season, HBCU collegiate baseball teams are permitted 56 games and most of them take place in the spring. However, the NCAA and the NAIA allow teams to hold some… [...]

The Jackson State University baseball team will face the Mississippi Braves in the Hank Aaron Tribute game at Smith-Wills Park next spring. The exhibition game will be played on April… [...]

HBCU baseball is coming to PNC Park. NAIA programs Stillman College and Wiley College will meet for a fall exhibition in the Inaugural Pittsburgh HBCU Baseball Classic, hosted by the… [...]

The Andre Dawson Classic, the annual round-robin collegiate baseball tournament for Historically Black Colleges and Universities, will have a new home at the Jackie Robinson Training Complex in Vero Beach,… [...]

When Jackson State hosts Grambling State this weekend, Coach Deion Sanders will attempt to remain unbeaten in his two contests versus that vaunted Louisiana football program. Yet, even if Jackson… [...]

RSS Error: A feed could not be found at `https://www.minoritybaseball.com/`; the status code is `200` and content-type is `text/html; charset=UTF-8`